Agriculture and Food Security in Africa: Why are Youth Not at the Forefront?

With contributions from the ICPAC Climate Change Technical Working Group 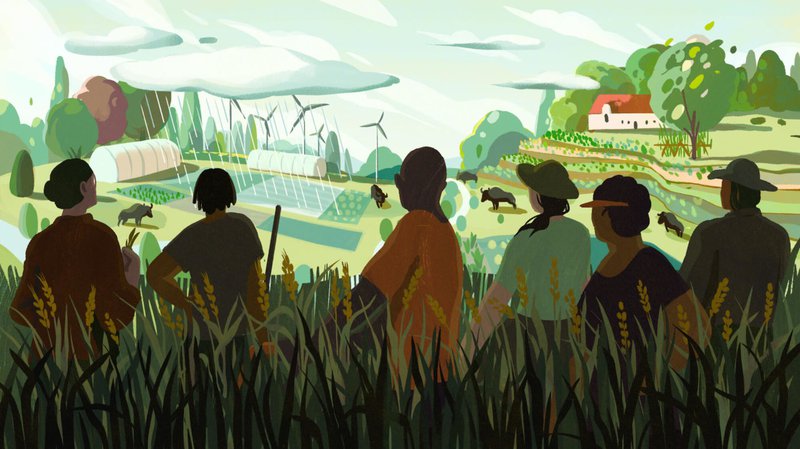 A video has recently been circulating on social media of a young lady protesting the portrayal of youth (or lack of) in the agriculture sector. During a CNBC Africa Special Forum on the challenges and opportunities for youth employment in agriculture that was held in Kigali Rwanda on 20-21 August 2018, the young Zambian medical doctor/farmer, showed a copy of an agriculture magazine with a photograph of an old lady and asked the audience,

“If you show this to a young person, a young woman like me and say to them, go into agriculture, are they going to go into it? Definitely, not!”.

Her argument was, to make the agriculture sector more appealing to young people, policy makers and partners need to make it sexy, by publishing photos of young good-looking men and women. Although her use of the word sexy is contentious, her point is loud and clear. Youth need a place at the ‘table’- an opportunity to play an active role in the growth and development of the agriculture sector and ultimately in the fight against food insecurity, malnutrition and (youth) unemployment on the continent.

The United Nations defines youth as those persons between the ages of 15 and 24 years. Globally, youth account for approximately 24% of the working poor. According to ILO, today’s youth are the most educated ever, but they face a number of challenges in the labor market which require a determined and concerted action over time [1].

The agriculture sector is the primary source of food and income for Africans and provides up to 60% of all jobs on the continent [2]. Food production in Sub-Saharan Africa needs to increase by 60% over the next 15 years in order to feed the growing population. However, numerous studies point to the fact that, globally, there is a growing problem of aging farming communities. An indication that less youth are venturing into farming as a career. In Africa, youth are continuously abandoning agriculture and opting to migrate from rural areas to cities in search of employment. This has left a vacuum that is likely to lead to future shortage of farmers as well as decreased production and productivity levels, as the old generation retires. In terms of food security, with the decreasing levels of food production, increasing population levels and changing wealth and consumption patterns; will there be enough food production to feed the generations to come? [3]

A study by the World Bank [4] indicates that many young people in Africa know little of the opportunities and possible in farming today. When asked about the best and worst ways to earn a living in their community, the youth rarely mentioned agriculture as the best (although not the worst); describing good jobs as those that command good pay and respect, two features not typically associated with farming under the conditions most familiar to young Africans. Although farming is the most immediate means of catalyzing economic growth and employment for young people, to change this, it must shift rapidly from its present status as an ‘occupation of last resort and low productivity’ to one of technical dynamism and recognized opportunity.

Challenges faced by the youth

A 2011 report by Feighery et al. [4], revealed that youth face a number of obstacles to achieving (and contributing to) food security, among them: production barriers such as lack of access to available land, lack of agricultural technologies and farming techniques needed to increase overall production, lack of knowledge to properly utilize the food available, and lack of interest in pursuing agriculture as a career. They also face income generation barriers such as lack of education, training and market access, and the fact that their migration to urban areas does not produce enough income to maintain household food security.

Ignoring youth involvement in agriculture poses a threat to the ability of the sector to meet the current and future demands of the rapidly growing population. There is a need for concerted efforts in dealing with the current state of affairs in order to secure the future of the youth, the agriculture sector and the food security situation in Africa. This calls for;

[3] Osti et al. 2015. The future of youth in agricultural value chains in Ethiopia and Kenya.

[4] Intersections of Youth and Food Security