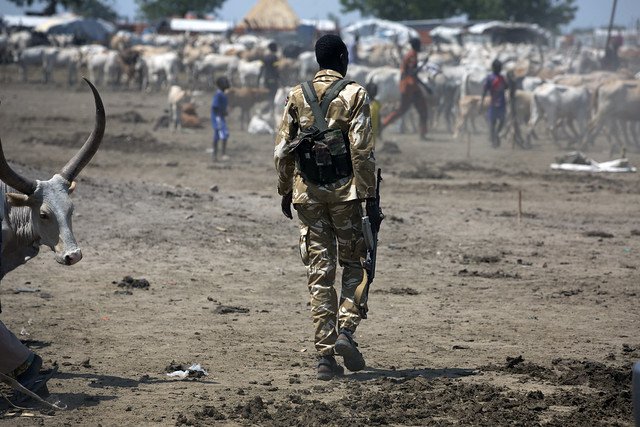 With contributions from the ICPAC Climate Change Technical Working Group.

In December 2021, the United Nations Council failed to adopt a resolution that would have seen the integration of climate-related security risks into conflict-prevention strategies. In spite of this, the UN security council acknowledges that many countries that are vulnerable to climate risks also face issues of fragility, poor governance, and terrorist threats.

The Climate Change and Security nexus is complex and context-specific. So far, the few studies available are largely speculative and not enough to swing the pendulum at the global level. Studies on Eastern Africa have shown that impacts of climate variability and change on natural resources have resulted in armed conflicts in some pastoral communities. The relationship between climate change and resource conflicts is often indirect, complex, and linked to political, economic, and social conflict factors; including social inequalities, low economic development, and limited institutional structures.

The African Union agrees that climate change has already and will continue to affect human security. This may result in human rights abuses, including intra and interstate conflicts or wars.

Extreme climate conditions as a driver of conflict in the region ranked fourth after youth unemployment, the pandemic, and mismanagement of the electoral process, according to IGAD’s Conflict Early Warning and Response Mechanism report. In Somalia, for example, young people are abandoning pastoral practices due to loss of livestock resulting from floods, diseases or drought, thus contributing to youth unemployment and increased poverty. Consequently, the youths are turning to charcoal production, a maladaptive practice banned by the government. A strong correlation between poverty and Violent Extremism (VE) globally has been established even though there is insufficient empirical evidence due to lack of published data at the regional level. 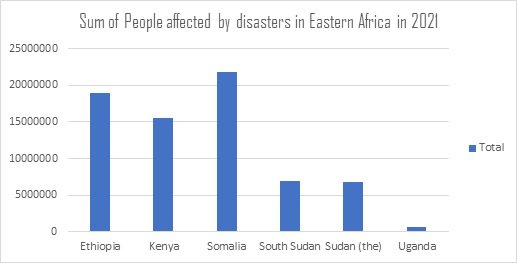 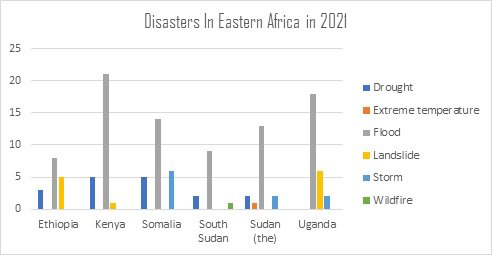 Over 70 Million people in Eastern Africa were affected by disasters in 2021 as shown above, with Ethiopia and Somalia reporting the highest numbers (figure 1). The same countries also experienced extreme conflict events in 2021 with Ethiopia and Somalia also recording the largest number of fatalities as a result of conflict (figure 3). This illustrates — while all the linkages between climate and security are yet to be identified — countries experiencing extreme climatic events in Eastern Africa are also experiencing insecurity-related threats.

Direct and indirect connections between climate and security continue in many aspects but still lack qualitative evidence. Even though little has been done in Eastern Africa to provide evidence of the climate-security nexus. Some experts have theorized the climate-security nexus is dependent on a number of, and sometimes, contradicting variables based on political, social, geographical, among other factors.

The complexity is also displayed in the interconnected way that the drivers correlate. For instance, climate extremes have been shown to result in food insecurity, increasing the risk of conflict; on the other hand, conflict has been shown to result in increased food insecurity in seasons with favourable climatic conditions. While sufficient data on the food security situation in both Ethiopia and Somalia is currently unavailable, data by IPC shows that 2021 left significant parts of the region in crisis (figure 5). Conflicts are products of reciprocal feedback loops which often increase vulnerabilities, and potentially amplify existing or create new conflicts.

Climate change adaptation and mitigation in addition to development interventions, often stimulate peace, but can also prompt new conflicts. An example of this is seen in the GERD project of Ethiopia; while the project creates modern ways of increasing water use and energy generation, it has also created a resource conflict on the white Nile as a key transboundary resource. 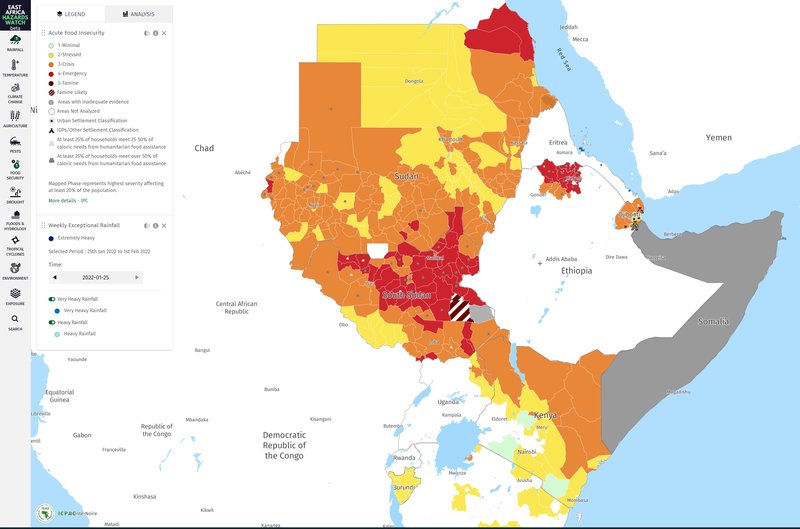 Various scientific reviews have agreed that the link between climate and security will most likely materialize in regions that a) are highly exposed to climate change and variability, b) have, due to historical, political, social, or geographical reasons, a high risk for (violent) conflicts; and c) are agriculture-dependent.

Approaches addressing both the impact of climate variability on food insecurity and the need to strengthen government institutions are seen as instrumental in preventing conflicts and contributing to the prospects of peace. More evidence is needed to continue the discussions on the security implications of climate change which has a major bearing on policy-making. This requires a multi-sectoral approach in the analysis and interpretation of data to provide qualitative evidence for policy makers that avoids sweeping generalizations in forming conclusions.