Could Neem Tree Oil be the Solution for Desert Locust Control? 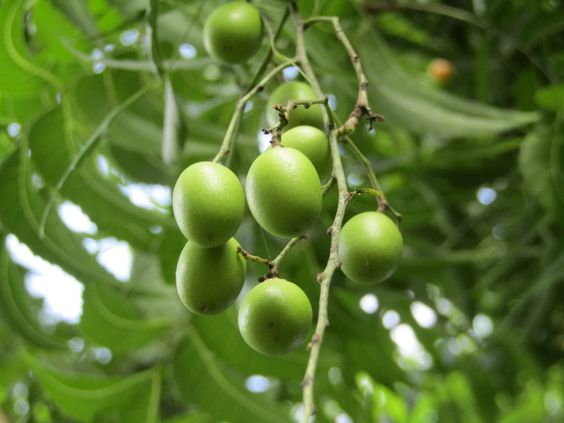 Neem tree — also known as Bead Tree, Holy Tree, Indian Lilac, Indian Neem, Persian Lilac and Pride of China — is used by many for its diverse medicinal properties, ranging from prevention of fungal infections, ulcers, as a pesticide and for skin care to treat various skin conditions including fighting signs of aging. The neem tree has been treasured as a consecrated remedy and a significant element in Ayurvedic medicine.

The neem tree grows up to 30 meters and can age between 100 and 200 years. Neem is a favourite for drylands reforestation; it provides shade and timber on top of the various benefits it bestows to the environment and human beings. It was brought to Eastern Africa in the 19th century by East Indian immigrants, who promoted the tree for its medicinal properties. Nowadays, it is extensively cultivated in various countries of the region including Kenya, Ethiopia, Sudan, Somalia, and Tanzania. In Kenya, the neem tree is well-known and has been given the Kiswahili name Muarubaini, which means the ‘tree of forty cures’. 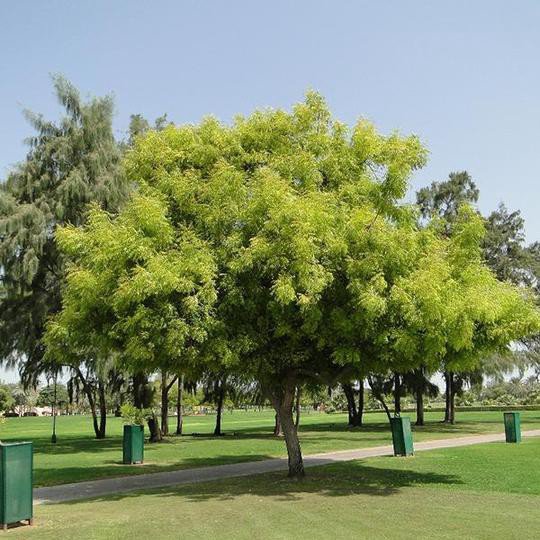 Neem oil is an extract of the neem tree fruit and seed. The tree’s fruit and leaves are rich in fatty acids and antioxidants that can benefit the body inside and out, through its anti-inflammatory and anti-bacterial characteristics. Research is still ongoing on the utilization of neem oil by human beings. Moreover, some studies have shown the potential of neem oil as an environmentally friendly safe way to control disastrous pests that are destroying crops and other plants.

In India the oil is widely used for various purposes and is considered a “low toxicity” substance by the United States Environmental Protection Agency (EPA). Cases of Neem oil poisoning in adults is rare but has been documented. Consuming large amounts of Neem oil can cause unpleasant effects, while ingesting or being in contact with trace amounts of the oil will likely not harm human beings. Like many other traditional and organic medicines, using it in moderation is advised.

Neem oil is a great organic, powerful insecticide ingredient for the garden, and the most preferable choice for controlling a variety of pests without harming the soil or plants. The oil is non-hazardous to birds, mammals, bees and other plants. Recently, components of neem oil are being added to various products such as tooth paste, cosmetics, soaps and pet shampoos. Neem oil breaks down quickly and leaves no lasting residue hence a good and safe bio-pesticide.

Azadirachtin, one of the elements in neem oil, is the most active and does the intended work of insect control. It is a natural pesticide that is usually used to treat, kill and repel many harmful insects and mites. It reduces insect feeding and acts as a repellent. It completely interferes with insects’ hormone system by making it harder for them to grow or reproduce.

Neem oil can be made into granules, powder, or liquid concentrate. It needs to be mixed with water before spraying. Since oil and water don’t mix easily, adding insecticidal soap and stirring frequently does the trick. 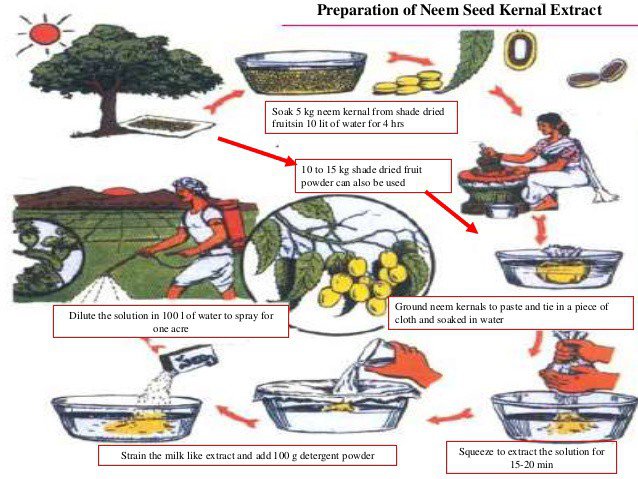 Is Neem oil the future remedy to put an end to the menace of the desert locust?

The East African region has been affected by desert locusts since late 2019 and the problem persists to date in numerous countries. In February 2021, ICPAC forecasted a very high risk of significant impact by desert locust to both crops and rangelands in Ethiopia, Somalia, and Kenya due to the high numbers of swarms recorded that are likely to breed in time for the new cropping season. In Kenya, some central, eastern, and north-eastern areas are currently in the short crop season. So far, surveillance and control efforts continued to prevent the damage that threatens the livelihoods of many people in the region.

Controlling the desert locust mostly depends on the use of chemical pesticides which is effective and expensive, yet potentially hazardous and unsafe to the people who spray the chemicals or get into contact with it. The other downside of using chemicals to eradicate locusts is the possibility of harming other insects not intended and contaminating the soil.

Alternatively, neem tree save money, and are environmentally friendly. The neem oil residue does not damage crops or human beings using it to save their farms.

The map below shows an approximate distribution of most neem growing areas in the world.

Interestingly, most of the countries in East Africa affected by desert locust invasion have a very suitable environment for neem tree cultivation. A lot more cultivation and production of neem could greatly boost the availability of neem oil as and insecticide for fighting locusts. This would be readily available to small scale farmers who can engage in local and inexpensive production of neem oil. The map below shows some of the areas mentioned as Neem growing in eastern Africa versus a February 2021 desert locust spread map by ICPAC. 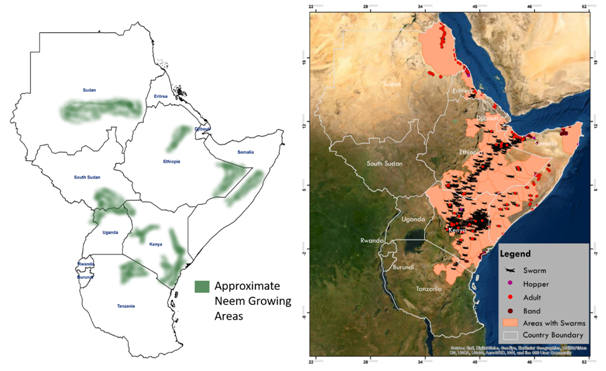 With recent recurring floods, desert locusts and COVID-19 affecting the region, more than 50 million people are projected to be food insecure and in need of urgent assistance.

While there is proof it is effective and the ingredient is available widely in East Africa, why are we still using the harmful chemicals? Is it not to our advantage to explore ways of producing neem tree oil commercially to make it accessible?

Jamie Eske , Cynthia Cobb (editor), What are the benefits of neem oil for the skin?, Medical News Today-2019.