More hopper hatching has been reported in Northern Kenya, Eastern Ethiopia, and Central and Western Somalia.

Ecological conditions (particularly the availability of green vegetation) are most suitable in parts of Kenya, South Sudan, Ethiopia and Somalia, due to a continuation of rainfall received in the season which enhanced vegetation regrowth.

Wind direction and speeds, which greatly determine swarm movement, is forecast to be southerly and south-westerly in Somalia. This lowers risk for an invasion for the southern and equatorial subregion, and increased risk in northern countries of the region.

Invasion status: desert locust hopper bands, adult locust and swarms continue to be reported in Turkana and Marsabit in Kenya, and Ogaden and Dire Dawa in Ethiopia. Hopper bands have also been recorded in multiple areas of Afar, Tigray and Somali regions of Ethiopia. In Somalia, Awdal, Woqooyi Galbeed, Mudug, Nugaal, Sool and Sanaag have hopper groups reported.

Highest risk areas for desert locust invasion based on forecasted suitable climate and existing vegetation conditions are outlined below: 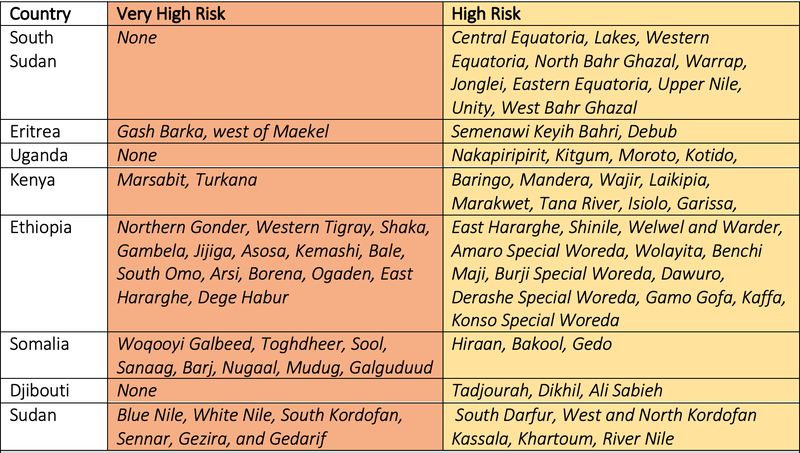