March to May 2022 forecast shows higher chances of a strong rainy season, but stakeholders should still prepare for worst case scenarios

ICPAC is a designated Regional Climate Centre by the World Meteorological Organization. Its seasonal forecast is based on an analysis of several global climate model predictions customized for East Africa.

The March to May (MAM) season constitutes an important rainfall season, particularly in the equatorial parts of the region where it contributes up to 70% of the total annual rainfall. Dr Guleid Artan, ICPAC Director, pointed out that “it is very important to note that global climate models have low skill in predicting the MAM season, and stakeholders should prepare for the worst. Given that we have experienced below average rainfall in the past three seasons, a wetter than normal season doesn’t mean that the region will immediately recover from the impacts of drought, especially in the eastern parts of the Horn. This is why I urge all to consult our weekly and monthly forecasts as they have a much higher degree of predictability."

In the regions worst hit by drought, the current trends are comparable to those observed during the 2010-2011 famine and 2016-2017 drought emergency. In this respect, the Food Security and Nutrition Working Group, co-chaired by IGAD and FAO, estimates that 12 to 14 million people are currently highly food insecure in Ethiopia, Kenya, and Somalia.

Looking ahead, it is likely that the situation in the affected areas will intensify through the transition period to 2022 March-May (MAM) rainfall season - this is being closely monitored and reported in ICPAC’s Drought Situation Updates. Beyond this point, the situation will be informed by the season's performance. However, considering the high livestock offtake and deaths reported so far and that the MAM harvests start around August, it is worth noting that any positive impacts will be realized much later. IGAD’s Executive Secretary, Dr Workneh Gebeyehu, stated that beyond immediate humanitarian assistance, “there is urgent need for regional and international cooperation to support national efforts to build community resilience through investing in sustainable development as the most effective approach to managing recurrent drought.”

In view of these grim realities, IGAD renews its call for an immediate scaling-up of humanitarian and risk reduction efforts, primarily by the respective national governments, humanitarian actors, and development partners. Humanitarian actors are also called to advocate for no-regret interventions. Lastly, IGAD urges governments of Member States to step-up investments in drought resilience-enhancing interventions especially IDDRSI, and adopt innovative drought risk management approaches including activation of a forecast based anticipatory actions.

Note to editors: The 60th Greater Horn of Africa Climate Outlook Forum (#GHACOF60) was convened online on the 17th of February by ICPAC (IGAD Climate Prediction and Applications Centre) in collaboration with the National Meteorological and Hydrological Services in the region and other partners to issue the March - May 2022 seasonal forecast. The hybrid forum brought together climate services providers and users from key socio-economic sectors, governmental and non-governmental organizations, decision-makers, climate scientists, and civil society stakeholders, among others, to discuss impacts and mitigation measures for the upcoming season.

Rainfall Forecast for March - May 2022 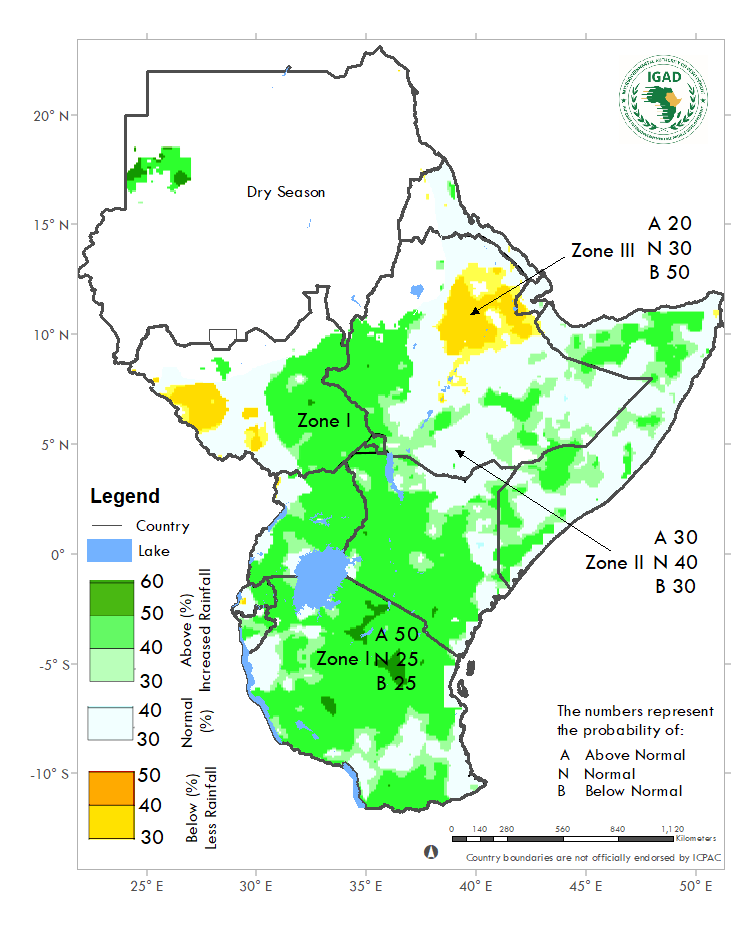 Temperature Forecast for March - May 2022