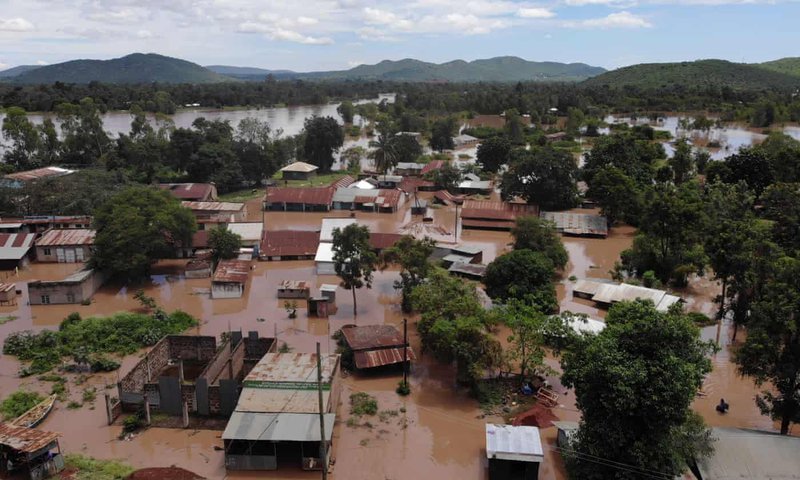 The ‘long rainy season’ in the equatorial region of Eastern Africa is generally observed within the months of March to May, with the ‘short rainy season’ occurring between October to December months. Past records show that floods and droughts are recurrent during these seasons. During the March to May season 2020, many weather stations over Eastern Africa recorded the highest amounts of rainfall in over 40 years, with some recording the highest amounts on record. The locations that reported record rainfall amounts included Kabale, Mbeya, Kilimanjaro, Lodwar, Djibouti city among others. At some locations, more than usual rainfall was also received in October to December 2019. The persistent and heavy rainfall during the 2020 long rainy season triggered flash floods, exceptionally high peak river flows and lake levels, with massive loss of property and life, displacement of society, and many other socio-economic impacts at a time when COVID-19 was ravaging the region. The impacts of the floods were witnessed across most parts of Kenya, Uganda, Ethiopia, Rwanda, Djibouti and Somalia (the international disaster database). The ongoing devastating flooding across Eastern Africa is remarkable in terms of duration, scale, and severity. By late May, the 2020 floods had killed more people than COVID-19, yet most attention in the region was focused more on COVID-19. 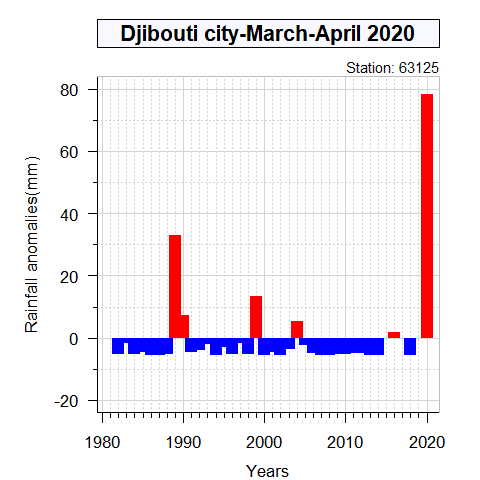 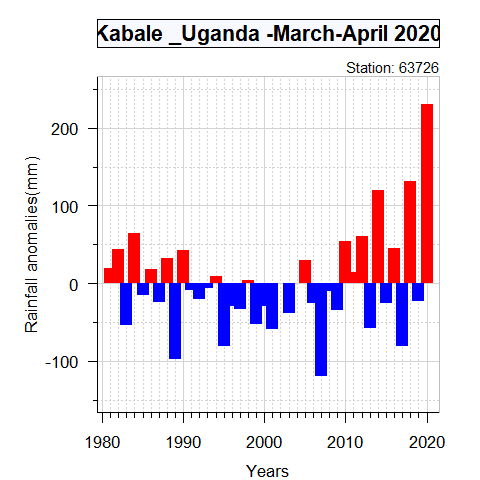 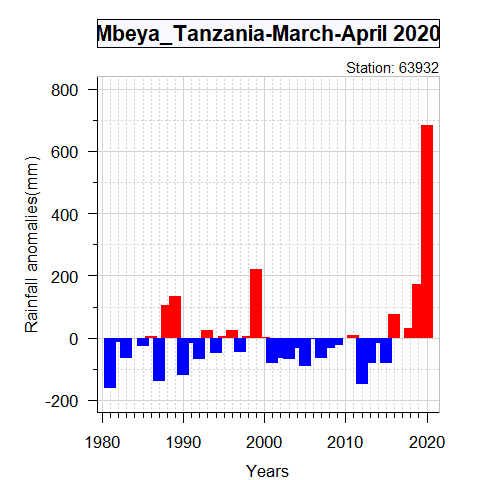 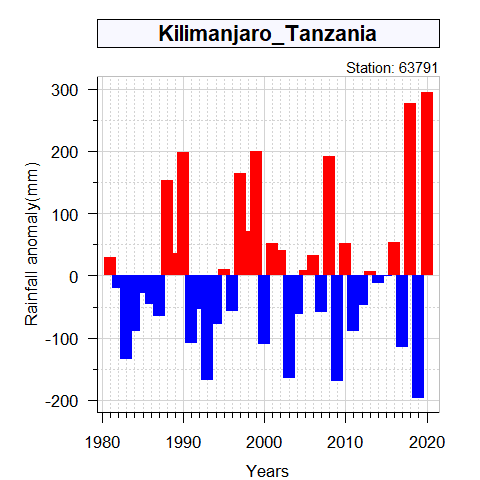 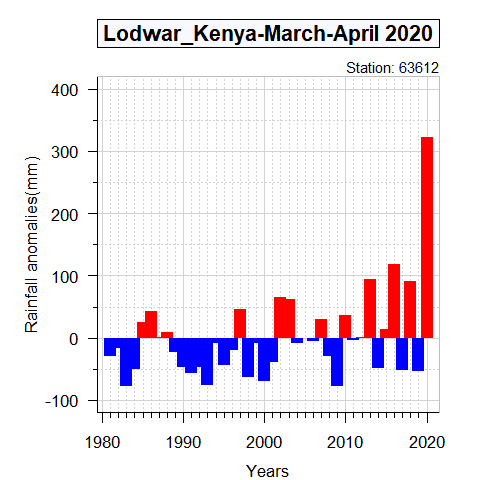 The observed rainfall comes in the wake of exceptionally high rainfall in November to December 2019 that led to extensive flooding in many of the same areas. Resulting in thousands of homes and businesses being flooded as well as widespread disruption to transport and other services. 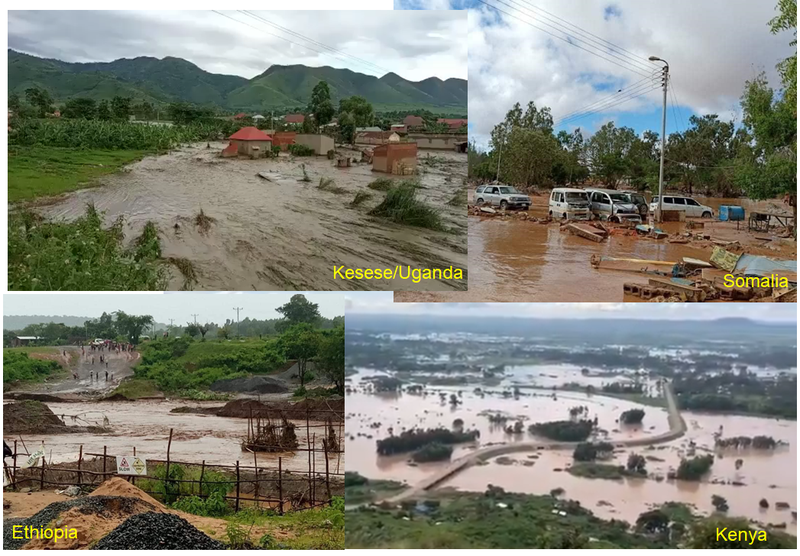 Floods in the Eastern Africa region resulted in over 500 people and 2,596 animal deaths. 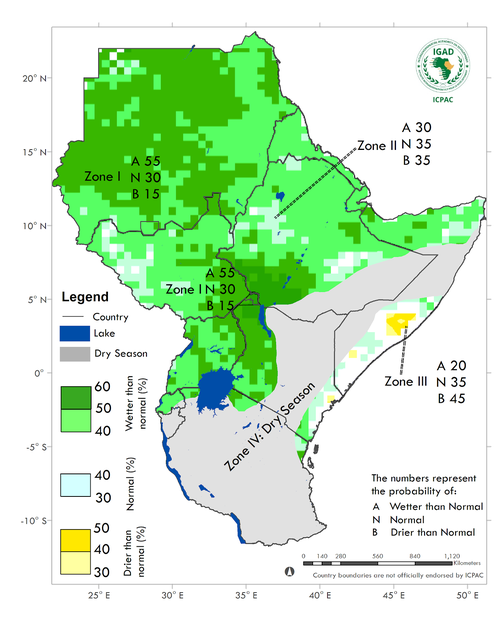 What are the main drivers of extreme rainfall events?

Rainfall events in the region are linked to large-scale systems that control regional climate variability such as the El Niño Southern Oscillation (ENSO), Indian Ocean Dipole (IOD), Madden-Julian Oscillation (MJO), Tropical cyclones, and Intertropical Convergence Zone (ITCZ) among others. The observed floods over the region in 1982/83 , 1997/98 , 2015/16, among several recent years were linked to El Niño, while those of 2019 were linked to the IOD. However, the ongoing floods have been very severe and are close to what was last seen in the region in 1961-63. Though the link between the 2020 floods and the causes is yet to be studied, the memory of the strong IOD during the 2019 October to December season and the warming of parts of the Western Indian Ocean region could be contributors. A number of cyclones were also observed over the Western Indian Ocean region in 2020. While seasonal rainfall totals demonstrate some predictability in the Eastern Africa region, there are other variables that come to play at the seasonal level that need to be well understood.

It should be noted that the impact of floods in the region were exacerbated by non-climatic factors. Such as, the encroachment of populations into flood prone areas; wetland degradation including sediment pollution of rivers; deforestation and land degradation among other land use systems that contribute significantly to soil erosion; higher water runoff, flash floods, landslides and loss of land productivity. According to UNISDR, 52% of land in Africa is considered degraded.

Is this an awakening to realism of climate change?

According to the recent Intergovernmental Panel on Climate Change (IPCC) Fifth Assessment Report (AR5) -among other literature including the Global Climate Risk Index- the frequency, intensity and duration of some extreme weather events has been changing as the climate system warmed. Climate projections from the Global Climate Models point to increased rainfall and average temperature rise by up to 5°C by the end of the century under a high emission scenario over East Africa. The IPCC-AR5 report shows that risks associated with extreme events will continue to increase as the global mean temperature rises. Thus exacerbating the impacts of extreme climate related events such as water level rise, flooding, mudslides and loss of lives relating to the most recent abnormally wetter seasons and the normally dry seasons becoming wet. While research has unequivocally shown that the climate is changing, we cannot attribute one observed climate extreme to climate change.The major challenges and limitations of the climate change projections of the future weather and climate extremes, at regional and local levels, make it difficult to attribute observed local extremes in weather and climate to climate change. The region must invest in observatory, modelling and research to monitor if the changing patterns were persisting for an extended period, typically decades or longer period , and identify other indicators that can help to associate local extremes with climate change. 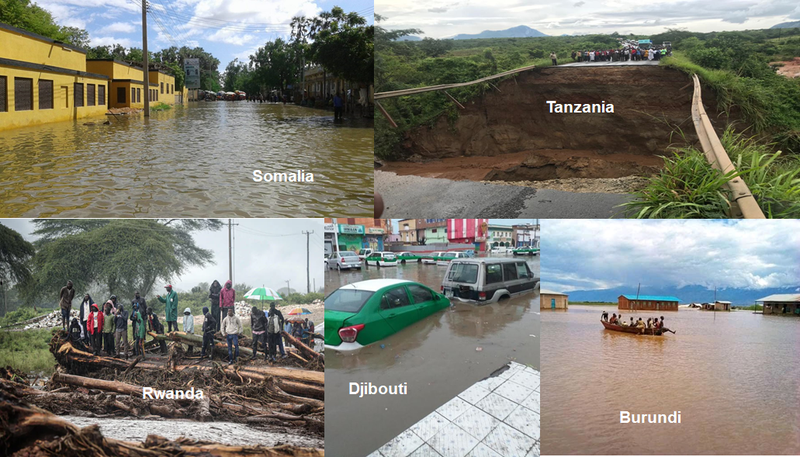 So, what is the best change approach?

Disasters cannot have impact without a social context, meaning an extreme event in an area with no population is not classified as a disaster. Therefore, effective disaster management that also takes advantage of massive flood water harvesting for the drought years is critical. Effective disaster management systems in support of the UN 2030 Agenda for Sustainable Development Goals (SDGs) can be found from the UN Sendai DRR framework of actions. It clearly highlights the need for effective actions to be undertaken before, during, and after a flooding event, since such actions will determine the consequences for exposed communities. Improved flood monitoring, forecasting, early warning as well as capacity of the community, disaster response policy systems among others will determine the losses resulting from local hazards including extreme rainfall events.

Better understanding of the detailed changes in hydrological cycle, which require comprehensive water budget analyses that need daily or sub-daily variables over Eastern Africa. This is because basin hydrology can also lead to complex relationships between rainfall and flooding. It is therefore important to explore the linkages amongst the basin-level rainfall with basin-level floodiness over the entire Eastern Africa. Also, identifying the drivers of seasonal flooding can be useful in improving forecast information for flood preparedness and avoid misleading decision-makers. For example monitoring a combination of, three days of record high rainfall events, soil moisture, as well as understanding the contribution of rainfall extremes recommended for the region. Most importantly, we need a combination of more concrete clever solutions and improved flood forecasts to prepare ahead.

Above all the underlying causes of environmental degradation must be effectively addressed through strengthening policies, adaptation and mitigation strategies by national and regional governments. These are plainly highlighted by the Sendai DRR framework for action, UNFCCC Paris climate change agreement and the 2030 UN SGDs.