With contributions from the ICPAC Climate Change Technical Working Group

The IPCC just recently released the first of three scientific reports that will make up the 6th Assessment Report commonly referred to as AR6. The report released is the Working Group I (WGI) report established on the physical science basis of Climate Change. You may have read a lot about the implications that the science presented in this new report has on humanity as a whole and on various geographical regions including Africa. It has even been called a ‘Code Red’ for humanity.

According to the regional fact sheet for Africa, both the North East and South East Africa are expected to see an increase in annual total precipitation as global temperatures continue to rise.

Is this good or bad news?

Well, it really depends on what lens you choose to look at it through. Adjacent to the map depicting this information, is another showing an increase in annual maximum daily precipitation driven by heavy rainfall amounts from single day storms. The scientific basis for this is that a warmer atmosphere can hold more water vapor and according to research for each degree of warming, the air’s capacity for holding water vapor goes up by about 7%. Therefore, an atmosphere with more moisture is expected to produce more intense rainfall events and more often than not, during short periods of time. 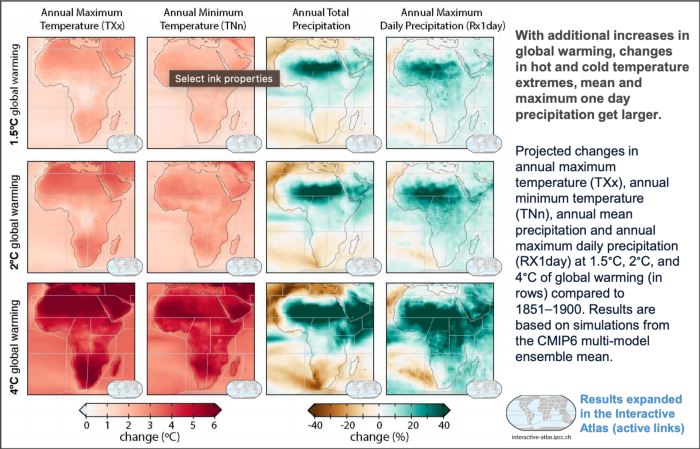 Now that is a cause for alarm, if you do ask me!!!

Heavy rain falling during a short period of time results in higher run-off rates, decreased percolation, flash floods, and increased flooding. Urban areas with poor drainage, paved surfaces, that are already seeing flooding when it rains continuously for a few hours, will see even more flooding — directly impacting economic activities and livelihoods. Coastal cities face the multiple threats of rising sea levels, storm surges, and heavy rainfall-induced flooding. This is already being seen in cities such as Nairobi, Mombasa, Dar es Salaam and others in the region. Additionally, in the case that these single-day storms that follow a period of prolonged drought, the rainfall will not be useful for replenishing soil moisture immediately and may even lead to increased top-soil erosion.

Seems like a lot of bad news, aye? Are there opportunities that can be explored??? What do you think??

There are wonderful suggestions to leverage these single-day storms to harvest water for use when the drier seasons arrive, now that sounds like a good idea, especially with proper planning and coordination at all levels of governance. This is a good example of taking advantage of an otherwise hopeless situation. Going into the future, better urban planning will be crucial in determining the exposure and subsequent vulnerability of cities to extreme events. According to the report, events that currently have a one-hundred-year return period are likely to appear more frequently before 2100. Incorporating this information in planning, design and upgrading of infrastructure is crucial to building resilience and reducing impacts of these projected extreme events.

The regional fact sheet on mountains highlights that mountain glaciers will continue to shrink in all regions where they are present and are projected to lose more mass in higher greenhouse gas emissions scenarios over the 21st century. Global estimates for future glacier mass loss suggest that if the current rate of glacial retreat continues both Mt. Kilimanjaro and Mt. Kenya’s glaciers will vanish by 2030. Currently, communities depending on water from the mountains are already feeling the impacts of melting glaciers and reduced snow. For example, on an expedition up Mt. Kenya, we saw the locals practice maladaptation by piping water from high on the mountain slopes. This presents a problem as it interferes with the natural ecosystem and could eventually lead to phenological changes in plants and animals as well as species move to more hospitable regions — even extinction.

The science exists and thankfully presents us with advance warning to support adaptation and mitigation responses. It’s on us to take advantage of this information and use it to make the appropriate adjustments to safeguard our future. The other two reports WGII and WGIII coming out in February and March 2022 respectively are expected to provide targeted information for adaptation and mitigation. Admittedly governance challenges at all levels exist but individual action will increasingly play a greater role in both mitigation and adaptation options at the local scale. All is not lost!!!