Examining the Evolution of the Desert Locust Threat in Eastern Africa 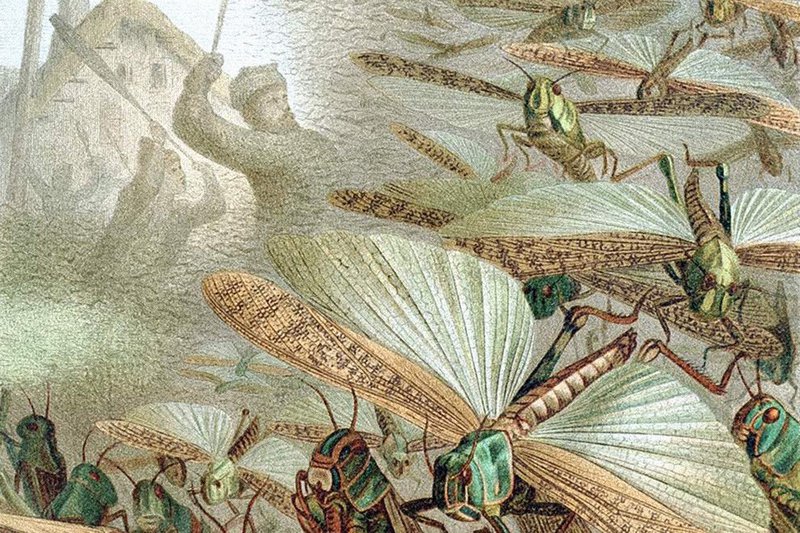 Food security in Eastern Africa is being compounded by an array of challenges which include climate-related disasters, peace and security, decreasing area of arable land, and the decreasing productivity of agricultural land. Over the recent years, these challenges seem to have intensified. The region is currently battling an unprecedented desert locust invasion, floods, COVID-19 pandemic, and now a risk of a drier than usual cropping season.

The Intergovernmental Authority on Development (IGAD) together with its regional Climate Center, ICPAC, have been in charge of issuing early warnings and coordinating efforts to respond to the food security threats posed by climate extremes. Climate related hazards lead to impacts that can be felt across borders, given the transboundary nature of climate. For instance, heavy rainfall in the highlands of Ethiopia can result in flooding along the Shebelle and Juba rivers in Somalia. Aside from cross-border climatic threats, their impact on food security is also felt in areas of transboundary trade, migration, and conflict.

The Evolution of the Desert Locust Threat

The desert locust threat has been at the forefront of food security discussions in the region since its outbreak. What has the regional involvement been? Has monitoring and early warning in the region worked? In August 2019, ICPAC, while monitoring the status of the major crops in Eastern Africa, reported a growing concern of the desert locust due to the number of swarms coming in and affecting Tigray and Afar regions in northern Ethiopia. The same concern was reported for some areas in northern Somalia and parts of Djibouti. Migratory and invasive pests threaten food security, hence ICPAC’s Agriculture and Food Security unit elevated the newly formed challenge to an alert level. This meant closer and regular monitoring of the situation, and rapid development of actionable early warning information.

In December 2019, ICPAC issued an alert giving special attention to the desert locust based on observations submitted by the countries affected at the time. The early warning regional alert for the impending invasion was repeated in the same month through various channels including the GMES & Africa agriculture monitoring service, and the regional Food Security and Nutrition Working Group (FSNWG). 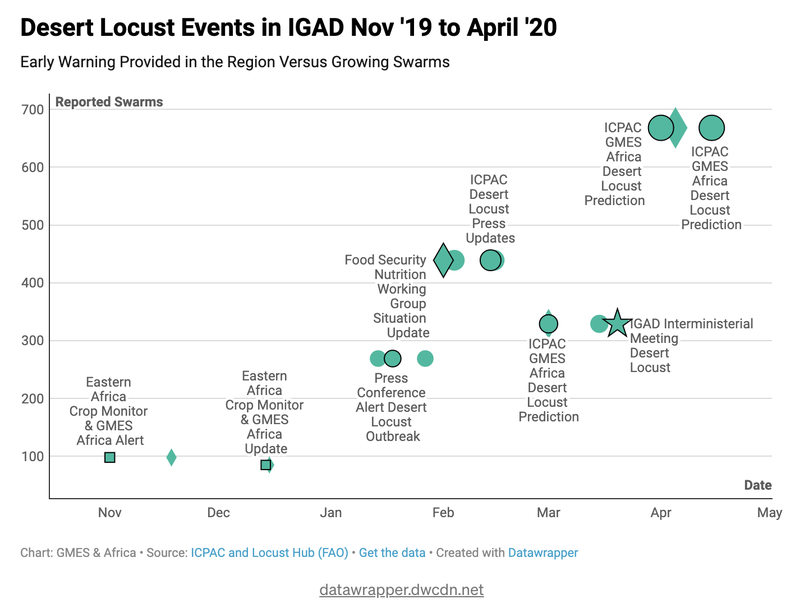 By late December 2019 and January 2020, locust swarms had been reported in large numbers in North-eastern Kenya and parts of central Somalia. This resulted in a press release by IGAD on the 15th of January calling Member States to take immediate action. Control efforts were ongoing in Ethiopia, led by the Ministry of Agriculture, assisted by Desert Locust Control Organization (DLCO). DLCO through their regular monitoring had also given early warning information on the risk of an invasion in December 2019.

Desert locusts have been at a full-scale invasion at different times since February 2020. As swarms migrate in search of areas to lay eggs, hoppers cause localized impacts on vegetation, while young adults consume crops and pasture on their way whilst searching for suitable areas for their development and reproduction. 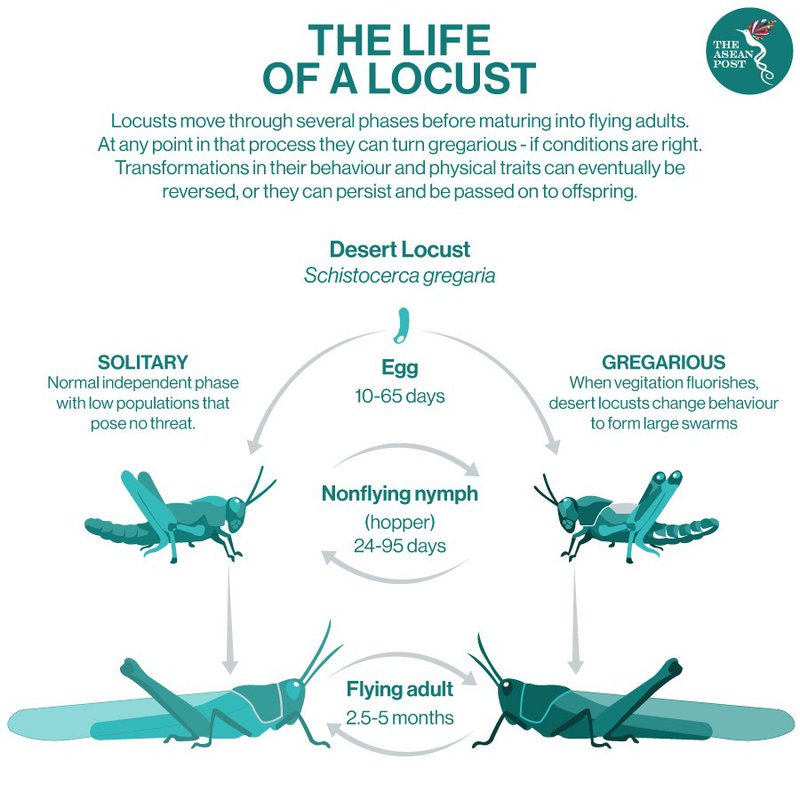 The mapping of the locusts was done in coordination with governments and other agencies like the UN’s Food and Agriculture Organization; who also developed and sent alerts on the locust migration, while appealing for critically needed funds for response and control. This showed early warning in the region is indeed functional and provided at a good lead time for action.

Climate extremes that cause floods and droughts have been experienced more frequently in the region and almost at an interchangeable rhythm. Governments, although at varying economic abilities, are incorporating methods of adjusting to climatic shocks in their fiscal budgets as an adaptation measure. A good example of this is the ongoing adoption of national climate funds. On the other hand, climate induced events like desert locust are less predicted nor anticipated. This means governments have been less prepared to absorb such shocks due to their unpredictability and other higher priority economic needs. For certain with climate driven challenges, countries in isolation may not be able to adequately tackle or manage, thus a regional approach in monitoring, early warning, and coordination in control may yield better results.

The 2019/2020 desert locust invasion has just shown us the importance of having in place an operational regional early warning system that integrates climate forecasts and earth observation tools to enable coordinated early action and joint interventions for effective control. 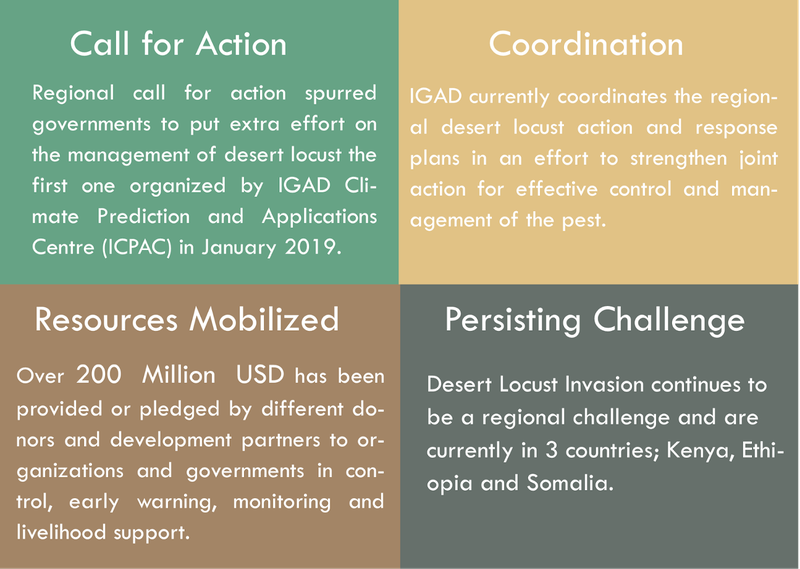 The IGAD Climate Prediction and Applications Centre (ICPAC) has been coordinating and monitoring food security threats through initiatives like the Global Monitoring for Environment and Security Africa (GMES & Africa) project and the Food Security Nutrition Working Group (FSNWG) platform.