Wildfires in Eastern Africa — Will Climate Change Increase the Intensity of Wildfires? 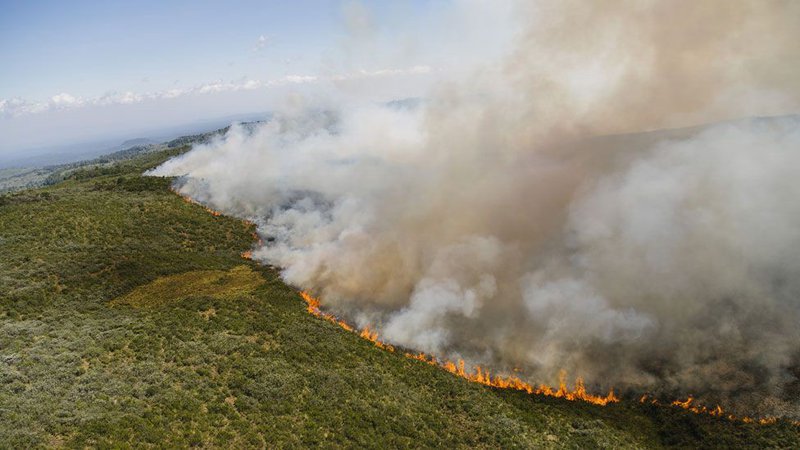 Every so often, a wildfire disaster grabs the international, regional or local news headlines. In 2019, the Amazon fire grabbed the world’s attention as we watched the ‘world’s lungs’ being consumed by raging fires. Shortly after, we saw news coverage of the devastating Australian and California fires. The headlines in April 2020 drew us to the intense wildfires in the Chernobyl Exclusion Zone in Ukraine: stopping short of a mile from the defunct Chernobyl Nuclear Plant. In May 2020, there was news of wildfires in Iran, while locally, it was reported that an area South of Tsavo East National Park, in Kenya, was on fire for several hours. In fact, if you look at the fire incidences on NASA Fire Information for Resource Management System, you get the sense that the Earth is literally on fire (Figure 1).

Figure 1: Map of the world showing fire locations recorded by satellite in the 7 days between 27th May and 2nd June 2020. Source NASA firms (Fire Information for Resource Management System).

Wildfires in the Eastern Africa region are a regular occurrence especially after the rainy season, when the environment is conducive for fire. They are a natural cycle in many ecosystems, especially the savanna, but also in the forest ecosystems. There are two fire seasons in the region, September to March in the areas north of the Equator, and April to August in the areas south of the Equator (see maps in Figure 2). These seasons coincide with the farming and harvesting times. Farmers cut down some of the vegetation and set fire to the rest in order to clear the land to plant crops. This way of clearing lands is considered the cheapest and has the advantage of killing pests and diseases while providing nutrients for future crops and rangelands. However, this technique is controversial as it can lead to deforestation, soil erosion and loss of biodiversity. For instance, in the Mount Kenya and Aberdare forests, key Kenya water towers and biodiversity hotspots, were set on fire by people clearing lands for farming, destroying thousands of hectares of land and killing biodiversity. 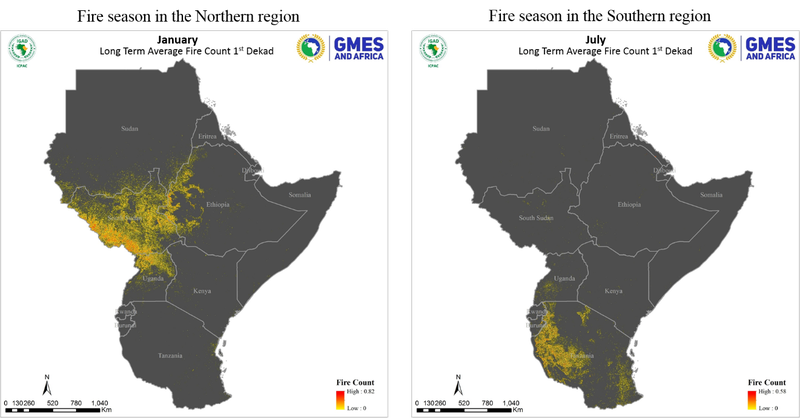 Figure 2: Eastern Africa maps showing spatial fire distribution and intensity for selected months in the two fire seasons. The data used is based on the Long Term Average active fires for the period 2000–2017 (source: eStation courtesy of GMES & Africa project).

The fire season in South Sudan is November to March. The graph below illustrates the number of fires in South Sudan for 2018/2019 and 2019/2020 fire seasons. After a good rainfall season, good vegetation development is observed (NDVI between June to October), providing abundance of biomass and consequently increased numbers of fire incidences (more than usual numbers of fires between January to February 2019 and from October 2019 to January 2020).

Why should we care about wildfires?

Like any other disaster, wildfires leave insurmountable destruction in their wake. Causing the loss of biodiversity, loss of human and animal life, destruction of properties, deforestation and land degradation. The smoke plumes from these fires pose acute respiratory health risks while increasing the amount of greenhouse gases in the atmosphere.

Wildfire, also known as wildland fire, bushfire or forest fire - depending on the type of vegetation available - is an uncontrolled fire in an area of combustible natural vegetation. Although some fires ocuur by natural phenomena such as lightning strikes or volcanic eruption, the majority of fires in Eastern Africa are as a result of human activity, and mostly for agricultural purposes. These agricultural activities include, slash and burn to prepare the land for crop planting or after crop harvest, pastoral activities which include clearing land for livestock or for regeneration of pastures, as well as honey collection and charcoal burning. People - willingly or unwillingly - often initiate fires that sometimes spread uncontrollably, causing significant losses of human lives, destruction of properties, natural habitats and biodiversity.

Though fire is mostly associated with disaster, some fires are good for the ecosystems. For instance, in Protected Areas and Forests, controlled fires are set intentionally by park or forest officials to pre-emptively prevent a more serious wild fire by burning the fuel early before accumulation. At the same time, this benefits the ecosystem by eliminating plant debris and dead trees, making way for young, healthy trees and vegetation to grow and thrive. Another type of beneficial fire is the backburning, used to manage an already occurring wildfire. Backburning involves setting a controlled fire in the path of an approaching wildfire thereby eliminating all fuel, such that when the wildfire arrives it dies out. However, this type of fire management using controlled fires should involve professionals who are trained to manage such kinds of fires, otherwise they become uncontrolled and end up harming rather than helping.

Will climate change increase the risk, extent and intensity of wildfires in Eastern Africa?

The Climate Change projections for Eastern Africa include an increase in annual mean temperature. Quantitatively the amount of rainfall is expected to remain the same. Nonetheless, the temporal and spatial distribution of rainfall is expected to change. The frequency and intensity of extreme events, primarily droughts and floods is expected to increase and there are possibilities that these extreme events will extend to new locations. Projected higher temperatures and extended drought conditions coupled with population growth pressure, are likely to increase occurrence and intensity of wildfires in the region in the future.

Climate change therefore will affect the fire seasons in one way or another. Increased precipitation will result in increased fuel (vegetation). If this is followed by a prolonged dry season or drought conditions, combined with increasing temperatures, we expect the frequency and intensity of fires to rise, and a disturbance in the length of the fire seasons. The last five years have been the hottest on record, and the period 2010 to 2019 was the hottest decade since records. In the region, we are already observing successive extreme events, 2019 was the hottest year and 2020 the wettest year on record. The Z-score graphs for some of the Eastern Africa countries show a general increase (more than usual) in fire incidences from 2002 to 2019 in some countries.

The effects of climate change combined with unsustainable management practices will increase wildfire risk thereby making our region more vulnerable to wildfires. Measures need to be put in place to monitor and manage these wildfires. Currently, ICPAC has a database of observed active fires derived from the MODIS satellite and availed through the eStation system. Though it is important to monitor the active fires, it is equally important to develop an alert system for the region to help avert potential catastrophic impacts of wildfires.

Various information is needed to monitor fire risks such as weather/climate data and forecasts; satellite derived information such as vegetation condition, biomass and soil moisture.